And What About College?: How Homeschooling Leads to Admissions to the Best Colleges & Universities
Cafi Cohen

Flunking Sainthood: A Year of Breaking the Sabbath, Forgetting to Pray, and Still Loving My Neighbor
Jana Riess

A Natural History of Dragons: A Memoir by Lady Trent
Marie Brennan

The Little Book of Market Myths: How to Profit by Avoiding the Investing Mistakes Everyone Else Makes
Kenneth L. Fisher

The Fellowship of the Ring
J.R.R. Tolkien 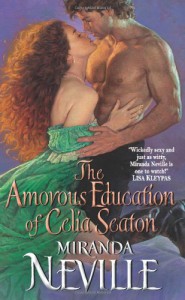 A wonderful enthralling tale that I stayed up half the night to read.

Miss Celia Seaton is having a run of bad luck, her uncle dies before changing his will, her fiancee changes his mind, and then she's kidnapped.

During her adventures, she stumbles across Tarquin Compton, who has been left senseless by robbers. Celia recognizes him but decides to take a bit of revenge for his treatment during the season. Together they flee across the moors while Celia spins a tale about Terence Fish since Tarquin doesn't remember his past.

Miranda Neville writes romances that show character development, Tarquin at the end of the book is a much more likable fellow than at the beginning. Neville also writes plots that have unexpected twists with a host of memorable characters.
Tweet